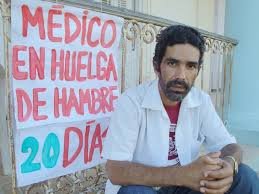 According to the Los Angeles Times, “worsening conditions in Venezuela are causing increasing numbers of Cuban medical personnel working there to immigrate to the United States under a special program that expedites their applications, according to Colombian officials who help process many of the refugees.”

The article cites U.S. Citizenship and Immigration Services statistics in which “the number of Cuban doctors, nurses, optometrists and medical technicians applying for U.S. visas under the Cuban Medical Professional Parole Program is running as much as 50% ahead of last year’s pace, which was nearly double that of the year before. At the current rate, more than 1,500 Cuban healthcare workers will be admitted to the United States this year.”

Based on statements from a “29 year old general practitioner from Santiago de Cuba” one can see why Cuba’s medical professionals are so desperate to flee.

“Nelia said her disillusionment started on her arrival in Caracas’ Maiquetia airport in mid-2013. She and several colleagues waited there for two days, sometimes sleeping in chairs, before authorities assigned her to a clinic in Valencia, she said.”

“It was all a trick. They tell you how great it’s going to be, how you will able to buy things and how grateful Venezuelans are to have you. Then comes the shock of the reality…” She went on to describe the workload as “crushing. Instead of the 15 to 18 procedures a day she performed in Cuba, she did as many as 90 in Venezuela, she said. Crime is rampant, the pay is an abysmal $20 per month.”

In the case of Manuel, a “32-year-old Cuban optometrist…who also fled Venezuela to apply for U.S. residency,” the situation in his clinic in Merida was just as bad. The young doctor “was prescribing and grinding up to 120 pairs of eyeglasses a day, triple his pace in Cuba.”

According to Manuel “As a professional you want to be paid for what your work is worth. What we were getting, $20 a month, was not enough to pay even for food and transportation, much less a telephone call to Cuba now and then. That’s the main reason I want to go to Miami, to earn what I’m worth.”