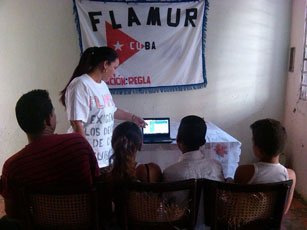 According to Martí News “In Cuba only 10% of citizens are connected with some frequency to the network. No feasibility studies demonstrating the irreparable damage to the economy and education caused by a large band width similar to any public university in the United States’ are known.”

“The first time Eugenio, 18, ​​student of telecommunications, navigated the internet was in the fall of 2013 for a class project at the Superior Technical Institute José Antonio Echevarría, southwest of Havana. ‘I had computer skills, as a child I had a computer at home. But I didn’t even know how to open an email account or use certain tools on the web. Students from other provinces were even worse off, as almost none knew how to handle a computer ‘, according to Eugenio.

Since the 90s, the olive green State has implemented computer courses in primary, secondary and pre-university schools. ‘But for one reason or another, most of the machines in schools are broken or underutilized. Computer classes are of very poor quality. Not to mention that computers are second generation. In primary schools, there wasn’t even a connection to the intranet, a local area network. Only at the university level there is internet access,’ says Danilo, a sixth grade computer teacher.

Living with a back to the internet is condemning the Cuban economy and creating a notable disadvantage for Cuban professionals. The government pounds the same arguments for 20 years. They accuse the blockade (U.S. embargo) for the slow connection at the universities of the Island. That subterfuge has accommodated a group of bureaucrats to stand idly by with arms crossed.”