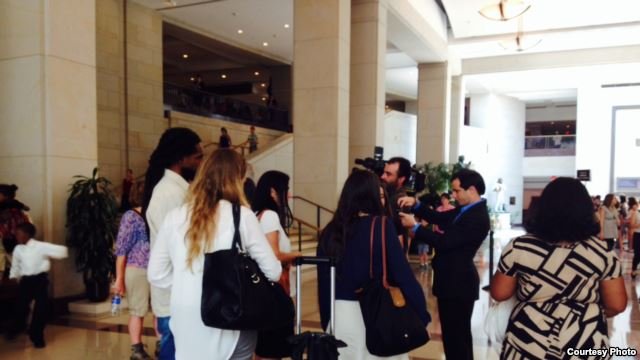 From the moment they set foot in the U.S. capital the students were overwhelmed with positive emotion. According to Marti News, they rushed through breakfast “joking and taking pictures at every step as they headed to the first visit in a tight schedule at the Capitol.”

As Yadira Serrano Diaz, one of the students proclaimed “It would be absurd to come to a place like this and not take photos” adding “images help you recount this adventure in detail to family and friends on the island.”

For independent lawyer and fellow scholar Laritza Diversent, getting to know the historic chamber of the Supreme Court added “a special charm to the visit. It was exciting, because it takes me back to the beginning of my career. It was an amazing experience” according to the young lawyer.

Other stops on the tour included The Library of Congress, an exchange with U.S. Senators, a few minutes with the press, and of course, experiencing the Capital at night.

All of the scholars agreed that their stay in the United States, and particularly this visit to Washington D.C. “has been enlightening. Celebrating the air of freedom and tolerance, the difference they have been able to breathe in these past six months of taking classes at MDC.”

The students also took the opportunity to offer a word of advice to those who would follow them, “to experience with an open mind, be willing to change your perspective of Cuba, the United States and the world” as has happened with them during the inaugural session of Somos un Solo Pueblo.