For the past few years, on the Day of Epiphany in January, The Ladies in White, along with other human rights groups throughout Cuba, gather neighborhood children and their families to hand out presents and snacks as a way of providing hope and a tiny “light in a dark place” for Cuba’s future generation. Unfortunately, during this year’s event, the Cuban State security and political police vandalized the Ladies in White headquarters and confiscated toys, leaving many children without a simple trinket to play with. Most of the children who went without this year were those of The Ladies in White themselves, who sacrificed so that other neighborhood children could receive a small present. 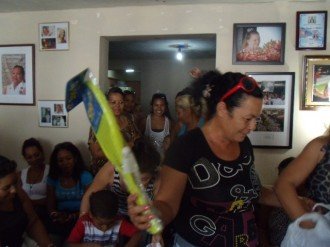 Yesterday, with the help of the FHRC, the Ladies in White “surprised” members of their group with toys for those children left stranded earlier in the year. The event was held at the Ladies in White headquarters in Havana. Organizers told members of their group to simply come by the headquarters to “collect some information.” This was in order to avoid suspicion and potentially another act of vandalism at the hands of the Cuban government.

Thankfully, the ruse worked, and 20 children showed up with their moms only to be delighted by the presents they missed out on back in January. The moms who showed up without their children were also given gifts to take home so that every son and daughter of the group could enjoy the Holiday week with something new to play with, and something promising to keep in their hearts…that a selfless deed can get rewarded.