Cuban Organizations That are Making a Difference 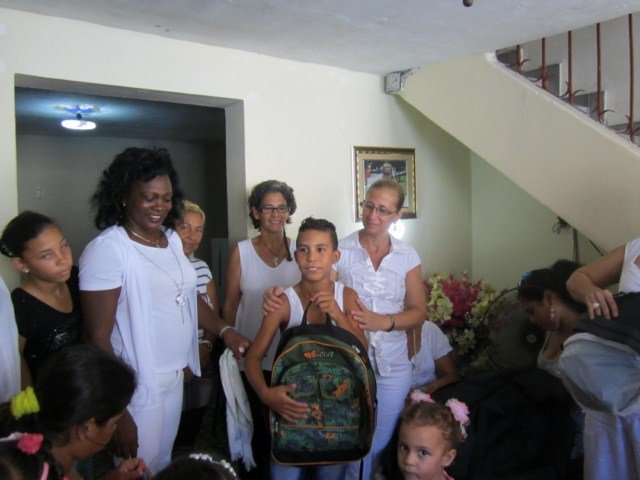 The Foundation for Human Rights in Cuba is a non-profit, working to raise awareness of Cuban human rights issues and raise funding to support social change. One way the organization is working to achieve these goals is by providing direct support, in a variety of ways, to activist groups that are already working within Cuba.

These are some of the Cuban organizations we work with: 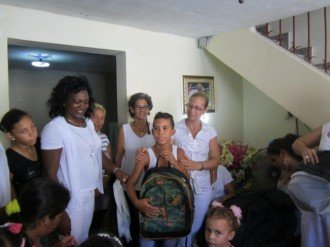 The Damas the Blanco (aka The Ladies in White) began as a group of mothers, wives, sisters, and aunts of the 75 human rights defenders arrested during the “Black Spring,” a massive wave of repression in March 2003. Every Sunday, these courageous women attend mass, praying for the release of prisoners of conscience and respect for human rights for all Cubans. Following mass, the Damas march in silence dressed in white, bearing photographs of their imprisoned relatives and holding pink Gladiola flowers as a symbol of their efforts (insert here). The Damas are often beaten and detained during their silent marches but always react to this repression with nonviolent resistance. Following the death of their leader, Laura Pollán, in 2011, they have been led by Berta Soler who has helped the group grow throughout Cuba and expand their efforts in the realms of civic and social responsibility.

The Ladies in White most recent project is called “Extending Our Hands” and is a great example of the type of work this group is doing around the island. This latest effort included providing school supplies and a bit of fun for children in need at the group’s headquarters and a nearby park. The funding for this project is from generous donations from Cuban exiles, organized by the Foundation for Human Rights in Cuba.

This independent information center was founded in November 2009 as an educational tool to advance human rights. It’s founder, Roberto de Jesus Guerra Perez, has been dedicated to keeping thorough records of human rights violations that occur in Cuba.

This Cuban organization (Resistance and Democracy Movement) is based in Guantanamo and organizes peaceful public demonstrations and other civil activist movements in hopes of leading Cuba into a peaceful democratic state. The organization is closely affiliated with the Cuban Patriotic Union, another organization that the Foundation for Human Rights in Cuba supports.

La Union Patriótica de Cuba (UNPACU) is a group of human rights defenders who are nonviolently struggling for freedom and human rights for all Cubans, including current and former prisoners of conscience. Initially the brainchild of former prisoner of conscience, Jose Daniel Ferrer, who was arrested during the Black Spring of 2003, UNPACU has grown rapidly through its willingness to willing to work with any individual or organization inside or outside Cuba that shares their love for liberty, democratic change and respect for human rights in Cuba. As UNPACU has grown, it has been joined by a breadth of generations, all of whom take Cuban writer and patriot Jose Martí’s words “Una Cuba con todos y para el bien de todos” (A Cuba with all and for the good of all) to heart.

Dr. Guillermo “Coco” Fariñas is a psychologist, independent journalist, and human rights defender who raises awareness of injustice, discrimination and human rights abuses committed by the Cuban government. Formerly a soldier in the Cuban Army, Mr. Fariñas fell out of favor with the government and was ultimately incarcerated when he blew the whistle on corruption in hospital administration. He has staged over 23 hunger strikes, protesting on behalf of prisoners of conscience, deceased human rights defenders, insufferable prison conditions and internet censorship. He is the founder of the Foro Anti-Totalitario Unido which recently merged incorporated into UNPACU. For his efforts, Mr. Fariñas has been awarded the Cyber Freedom Prize from Reporters without Borders (2006), the International Human Rights Award at Weimar, and the European Parliament’s Sakharov Prize for Freedom of Thought (2010).

Yoani Sanchez founded the blog “Generation Y” and is Cuba’s leading blogger.  With more than half a million followers on Twitter, she has become a leading voice for freedom of press, freedom of expression, and other human rights issues. Based in Havana, Ms. Sanchez also helped to found the bloggjng platform Voces Cubanas which has nearly five dozen independent bloggers from around Cuba, making it is the voice of independent journalism in Cuba. In 2008, Ms. Sanchez was voted one of Time’s 100 Most Influential People and received the prestigious Spanish Ortega y Gasset Journalism.

What Can You Do to Help?

If you would like to learn more about these and other Cuban organizations that we support, please contact us! If you’re looking for practical ways that you can promote the cause of freedom of speech for Cuba, check out our Connect Cuba campaign. Did you know that in spite of a complete fiber-optic cable system being in place, access to the Internet is practically denied for the majority of Cubans? In fact, the web is mostly used as a censorship tool by the military, known as the “cyber-militia.”

Empower Cubans with the freedom of the Internet. Visit our campaign page to donate, shop for Connect Cuba gear, and watch a video that further explains the cause. While you’re there, make sure to sign the petition and invite others to do the same!