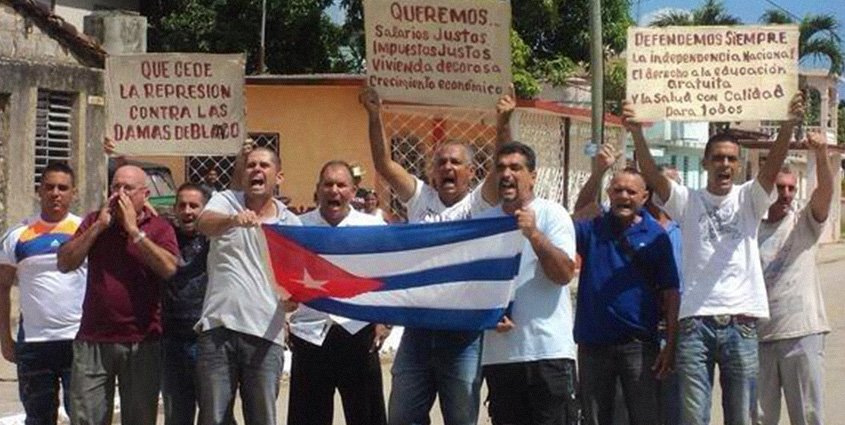 As reported by Human Rights journalist Felix Navarro… On September 22nd, the Cuban Regime’s political police assaulted the Ladies in White of Matanzas for the eleventh consecutive Sunday. After participating in their usual Sunday Mass, members of the iconic human rights group began a peaceful march that was disrupted by supporters of the Regime, led by State Security officers. In support of the Ladies in White, several members of the Patriotic Union of Cuba (UNPACU) climbed onto a rooftop, waiving the Cuban flag and hoisting up posters to protest against the Castro Regime’s violent tactics and intolerance in order to protect their fellow activists, and demand basic human rights.

After a few hours, the police withdrew from the crowd, allowing UNPACU representatives to speak directly with members of the general population who had assembled. This resulted in a very positive impact on educating the community about their rights, while deflecting additional violence against the Ladies in White. This form of network building, collaboration, and community relations among human rights movements on the Island is opening an important space for an independent civil society while promoting the cause of democracy in Cuba. This is why it is very important that the Cuban community begin to awaken to the idea of claiming non-violently for their rights as human beings, and to continue opening spaces for independent organizations that call for the welfare and progress of Cuban society.