A Conversation with Davi D from Omni Zona Franca 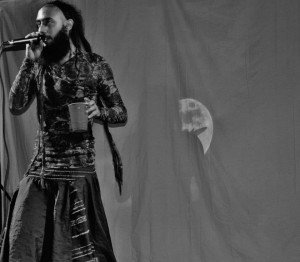 I had the unique opportunity to sit down recently with Cuban poet, musician and painter David D Omni of the arts collective known as “Omni Zona Franca,” based near Havana, Cuba. It was a franc discussion about culture, community, and the hope of a Democratic future in Cuba.

My first encounter with David D Omni was fascinating to say the least. The young, soft spoken Cuban sported a look that would fit in easily with any of the trendy art scenes of New York, LA, or Miami’s Wynwood Art District. Yet, underneath a half-shaven head morphing into lengthy dreads and thick-rimmed, red eyeglasses, stood a man in a woman’s dress, emanating the calm, comforting aura of a spiritual guru complimented with a distinctive yet familiar Cuban persona.

David D Omni was raised in the Alamar district, east of Havana, which according to David D, is a “young city, formed in the 1970’s, as a project.” Think of Chicago’s south side or better yet, a more tropical version of New York City’s “Nychaland.”

“Alamar became a place of new influences from other Latin countries and Europe. A place where you had this weird mix of cultures, different from the nationalist culture of the Cuban government.” Within this weird mix, a generation of young Cubans grew up listening to FM radio stations from the US, where Rock and Hip-hop filled theirminds and imaginations with something fresh, new, and different. Combine that with the melting pot of cultures fused into this seaside project on Cuba’s north shore, and a recipe for a new generation of Cuban artists was baking to perfection under the sweltering sun.

The dish was ultimately served to the Cuban people, and disapproving dictatorship, as a generation of expressive, creative locals coming of age in the 70’s, 80’s and 90’s. This atypical youth, with dissimilar outlooks to what was being offered or expected by the official, repressive regime, caused quite a stir. And it was there, within this bubbling over of creative energy that David D’s group came to fruition in the form of a collection of performance artists, “Omni,” and poets known as “Zona Franca” that united to launch a free-spirited artistic collective, bent on uncensored, free expression.

David D joined Omni Zona Franca shortly after leaving school, feeling at home in a space where according to the artist “I can express my opinions, what I said was important.” Important indeed, as some of Omni Zona’s recordings, including Protesto or Protest, has become a rallying call for a growing pro-democracy, human rights movement on the Communist island nation.

Omni has also helped to organize a yearly Festival Poesia Sin Fin (Unending Poetry) which has been held in Alamar for 13 years running. According to David, the artistic conference was “built as a space for free and open dialogue, for people on the fringe wanting to express themselves.” At its height, the Festival reached between 3 and 4 thousand participants…until the government stepped in. Barred from organizing in public spaces, the Festival was limited to meeting inside people’s houses, causing the group to dwindle to a little under a 100 participants per year. Still, the yearly Alamar staple now features a much smaller, yet according to David “much stronger” group of artists. “We invite the whole hip-hop and artist movement, we invite independent journalists, filmmakers,” to what David describes as “a spiritual gathering.” A fitting description, as the event brings a new level of “consciousness” to the community.

Regarding the future of Omni Zona Franca and life in Cuba, David is optimistic. “What I see as the future is planting seeds, and as long as I do these things there is more freedom, more dialogue. I think it doesn’t depend on anybody inclusive of governments, because people give what they receive. People give peace, love, and liberty when they have peace, love, and liberty inside themselves. We need an internal revolution, before we can manifest the external one.” Describing some of the great human and civil rights leaders of the past, “it’s all about liberty of consiousness…it’s a current that comes through us from guys like Ghandi and Bob Marley. The enemy is within.”

In addition, David is confident that democracy and change is possible in Cuba because he “comes from a generation that brings this spirituality and the technological age.”  The young artist feels he is also getting plenty of practice within his own group, a highly diverse and opinionated assembly of artists and free thinkers. “If I want democracy for Cuba, I have to be able to achieve it with the ten people in our group. If not, it can’t be done with an entire country.”

As a final message from our interview with David, the humble poet wanted to simply “thank all the people of the world that are living in liberty…bendiciones.” And if you are what you give, David should expect many blessings in return.