Ladies in White, UNPACU, FANTU and others celebrate Reyes Magos in Cuba 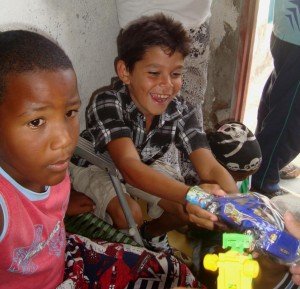 Article from the Miami Herald

The Ladies in White, Cuba Patriotic Union, [FANTU and other groups] delivered toys that were donated by Cuban exiles who live in Miami.

On one side of a Cuban road, dissidents gave children toys donated by Miami exiles for Three Kings Day on Sunday. On the other, government and Communist Party officials hosted a competing celebration of the Spanish version of Christmas Day. In Cuba, it seems that politics can infect even the annual Jan. 6 celebrations of the Three Wise Men who brought gifts to the baby Jesus. Around the island, the dissident Ladies in White distributed toys, sweets, cakes and soft drinks to children, most of items were donated by the Foundation for Human Rights in Cuba, linked to the Cuban-American National Foundation in Miami.

Police and state security agents in plainclothes warned families in the eastern city of Bayamo to stay away from an opposition Three Kings Day gathering in nearby Holguin, although most attended, Holguin dissident Berta Guerrero said. The main government attempt to interfere with the dissident celebrations came in the eastern town of Palmarito de Cauto, where the Ladies in White and Cuban Patriotic Union hosted a party Sunday at the home of Union leader Jose Daniel Ferrer. State Security agents stopped the truck bringing 60 children, 40 adults and all the sweets and cakes from the nearby city of Santiago de Cuba early Sunday because the driver was not properly licensed, Ferrer said. Another driver was found, and the truck arrived a bit late but in time for the gift distribution.

Ferrer said that municipal Communist Party and government officials organized a competing Three Kings Day celebration across the street from his home, in an abandoned cement-block factory owned by the government. Police cars and other government vehicles were parked at the celebration but it drew only about 125 kids, he said, perhaps because it was charging for the food and drinks.

In contrast, more than 300 children of anti-government activists and neighbors attended the celebration in his house, Ferrer told el Nuevo Herald in a phone conversation during which the screams of children could be heard in the background, “This is chaos. We have a patio full of kids,” said Ferrer, who served eight years as a political prisoner, adding that last year’s gathering at his home drew only 120 children.

Havana blogger Ivan Garcia, meanwhile, said that government-owned toy stores in the capital are selling even modest toys for the equivalent of a month’s salary and added, “To find toys that are good, pretty and cheap is almost a mission impossible.”

Until a few years ago, Fidel Castro banned Christmas and effectively turned the government into Santa Claus with a ration system for toys: Kids got one toy from each of three categories: good, medium and basic.

That ration system was halted several years ago, Garcia said, Christmas and religious sentiments have returned and now “many children go to bed early the night of Jan. 5, waiting for Melchor, Gaspar and Baltasar to put toys under their beds.”

Cuban Catholic bishops closed the year Sunday with a Mass at the Our Lady of Charity Basilica in the eastern town of El Cobre, home of the island’s patron saint, during which a Vatican envoy read a message from Pope Benedict XVI.

The pope, who visited Cuba for three days in March, urged Cubans to “continue persevering in the faith with vigor, remember constantly the duties of Christians, and give a new boost to the work of evangelizing.”