Ladies in White are repressed, but do not quit in the fight for Human Rights

Eleven “Ladies in White” activists were detained yesterday by State Security and National Police agents while they were on the way to participate in their monthly meeting known as “Te Literario”. This get-together is held every month with the objective to analyze matters of interest, discuss different initiatives and talk about other diverse topics relating to their organization.

Leader of the group, Berta Soler, says the women will continue to fight stronger than ever for the unconditional liberty and human rights of all political prisoners, despite the increase in repression and temporary detentions.

Every Sunday, the Ladies in White attend mass at Santa Rita Church in Miramar, Havana. Afterwards they march peacefully down Fifth Avenue with gladiolas in their hand. They are the only opposition group moderately tolerated by the government on the streets of the Island.

Nevertheless, Soler explains the Ladies in White have been complaining about the increasingly violent steps being taken against them by the Castro brothers’ government supporters and Cuban intelligence agents. 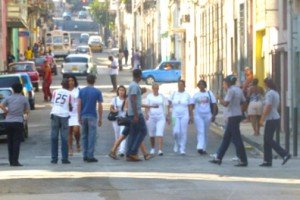 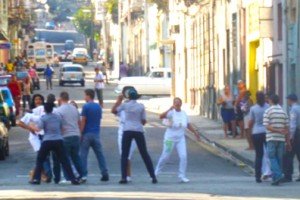