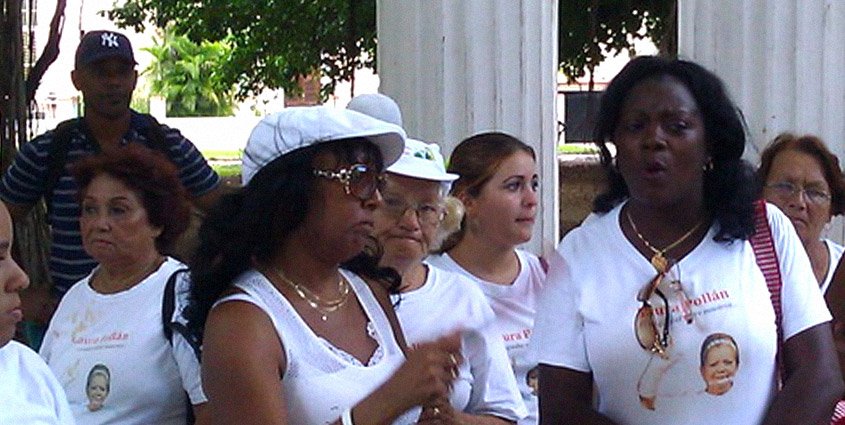 44 women of the Ladies in White Laura Pollán Movement attended mass at the church of Santa Rita de Casia, in Miramar, Havana, on Sunday. After the religious service, they made their usual march down 5th Avenue.

Another 33 Ladies in White made their religious Sunday activities in Santiago de Cuba; 15 in Matanzas, 7 in Guantánamo, 1 in Santa Clara and 1 in San Juan y Martínez, Pinar del Río.

These activities took place without any incidents, despite the presence of a State Security police contingent that kept a strict, intimidating watch over the women.

Berta Soler, spokeswoman for the Ladies in White, said on Sunday that her organization will accept no more, that the mobs break into their houses to hit them.

“Let the government know that we will not be crushed by their repression. We will continue our complaints. We are peaceful women who only call for respect for human rights and for the liberty of political prisoners. But if they come into our household to attack, they will not come out,” said Soler at a park near Santa Rita before more than 40 women and a number of men.

In the province of Holguín, 14 Ladies in White were repudiated – the paramilitaries Fast Response Brigade threw rocks, streamed water and broke into the household where the women congregated and hit them. Subsequently, the women were arrested, next to 6 men and 4 children.

“In the city of Pinar del Rio, the police prevented the Ladies from participating in the Sunday mass, surrounding their houses to prevent them from coming out” informed Raúl Luis Risco Pérez, lider of the Pinareña Democratic Aliance.

In Santa Clara, three women from the movement were arrested in order to prevent them from assisting the Té Literario on Sunday.