Cuban ambassador in Chile does not receive the president of Christian Democracy organization, who was interceding for Rosa Payá. 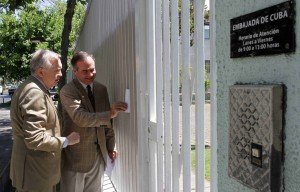 “Leave it in the mailbox”. These were the only words the Cuban ambassador in Chile said as an answer to Ignacio Walker, president of the Christian Democracy organization, and his vice president Jorge Burgos. Yesterday, both leaders arrived at the diplomatic venue, with the objective of formally delivering a letter to the Cuban ambassador Ileana Díaz-Argüelles. In the letter, they requested to Raul Castro’s government to reconsider the denial of a visa to Rosa Maria Paya, the daughter of the deceased Cuban dissident Oswaldo Paya.

The young girl, 23, was invited to participate in a course organized by the Miguel de Cervantes University, whose rector is the ex-congressman Gutenberg Martinez.

“This shows that not even a minimal deference was shown  for a senator and a congressman of the Republic in terms of a respectful letter”, said Walker, who had tried to contact the diplomat since Friday, seeking an appointment to formally deliver the letter.